Libretto by Metastasio (I)

The surviving second and third acts of Catone in Utica, one of Metastasio’s most dramatic libretti, premiered in Verona in the spring of 1737 in a setting by Vivaldi, contain some of his finest, most mature, and most original arias, and are published here for the first time. They evince a potential dramatic intensity that makes us regret all the more the loss of the first act. Only one aria of Act I can be definitely recovered from a surviving opera, but the rest has now also been successfully reconstructed by Alessandro Ciccolini, whose intimate knowledge of Vivaldi’s working methods, combined with brilliant stylistic insight won universal acclaim for his work on Vivaldi’s Motezuma and Ercole sul Termodoonte. Ciccolini has also composed cadenzas and da capo variations for all the arias, published here in an appendix.

"[For his completion,] Alessandro Ciccolini, who, mindful that Vivaldi frequently adapted vocal music for his instrumental works and vice versa, has composed the missing passages using themes from the concertos as his starting point. His arias dovetail beautifully with Vivaldi's scheme of things..." The Guardian

"Ciccolini and Curtis deserve enormous credit for transforming an incomplete obscurity into a coherent and compelling opera." Gramophone

"The opera survives incomplete, but this is a fascinating and apt reconstruction and there is some marvellous stuff here." BBC Music Magazine 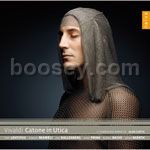