There are many different aspects in the work of Pierre Boulez which influenced me in my compositional work and in my thinking of music. Not only is the developement of the techniques important, but also the way of speeking about music and communicating the music as he does through his conducting and in his theoretical writings.

When I got the comission to write a work for the MusicNOW series in celebretion of Pierre Boulez's eighty-fifth birthday, I started to read the early writings by Boulez: Relevés d'apprenti (Notes of an apprenticeship), 1948 to 62.
Based on the rhythmic ideas of Stravinsky's "Danse sacrale", Boulez shows the possibilities of creating form out of small rhythmical cells, which can be organized independently of the pitch and the other parameters. In another text, Boulez describes a harmonic operation which is generally called pitch multiplication and which allows you to develop a complex harmonic situation from a more simple primary harmonic material.
Both of this ideas provided a basis for my thoughts concerning the composition. It was very interesting for me to show the connections and references on the one hand, but at the same time to try to develop the ideas in another formal and harmonic context and to create something new on this background. In this sense the piece is a tribute to the birthday of Pierre Boulez.

I use the german word "Wandlung" in the sense of "transformation": the musical situation is transformed over the course of the piece. It happens without a sudden change of the material or of the musical atmosphere.
However, the situation at the end of the piece will be different than at the beginning - there is no way back, no chance to return. Even a short reminiscense becomes strange and wierd, so the musical development has to stop finally. 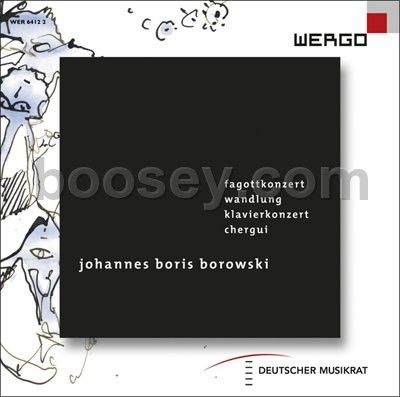