Libretto by Antonio Salvi (I)

This important opera, performed in Rome a year earlier than Vivaldi's Il Giustino, and including the young Carestini in its cast, was long thought to be lost. Nearly all the arias have however been found, some missing their orchestral accompaniments, in various locations, and the lost recitatives and other missing parts have been composed by Alessandro Ciccolini. 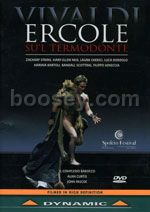