<DIR=LTR align="left">In the 1960s, Khachaturian composed a trio of Concerto-Rhapsodies – one for violin, one for cello, and one for piano. The work dedicated to Mstislav Rostropovich, one of the greatest cellists of the last century, demands extraordinary dedication and concentration from its soloist to fulfill its expressive as well as technical challenges. Opening with the brass playing a stark fanfare, there is a good deal of improvisatory-style writing for the solo cellist (just the kind Rostropovich’s larger-than-life personality could bring to life), with moments of eerie orchestral accompaniment in the elegiac opening section. This is followed by a scherzo-style central section, whose progress is halted by the fanfare motif. Further mournfully reflective music for cello and orchestra, with sardonic flute fanfares adding to its bitter flavour, finally reaches an orchestral climax with an impassioned string theme, to which the soloist responds by playing a lyrical and poignant lament. A final gallop to the finish brings the work to a rousing end. 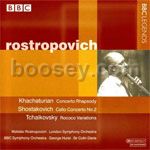