<DIR=LTR align="left">In the 1960s, Khachaturian composed a trio of Concerto-Rhapsodies – one for violin, one for cello, and one for piano. Khachaturian completed the definitive version of his Piano Concerto-Rhapsody in 1967 for Nikolai Petrov, silver-medallist at the first Van Cliburn Piano Competition in 1962. One of Khachaturian’s most peppery scores, it launches with a hurtling cadenza for the soloist which strongly recalls the alarming organ solo of the Third Symphony. There is much play in the first section of this work on a ‘Dies irae’ style theme. The central scherzo is playful, even jazzy with prominent roles played by brass and percussion, yet with something of a malicious edge. The soloist’s hurtling cadenza music returns, this time accompanied by the orchestra, driving the music into ever darker regions, culminating in a grotesque funeral procession out of which emerges once again the soloist’s hurtling music, concluding with the pianist hammering on an angry dissonance which refuses to accommodate even the orchestra’s final major chords. 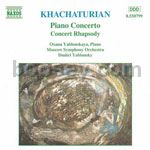