<dir=ltr align=left>This early work gives a fine demonstration of Khachaturian’s piquant orchestration, much melodic charm and even a sense of humour! It is a work which deserves a place in the repertory alongside such folk-inspired works as Kodály’s Peacock Variations or Bartók’s Rumanian Folk Dances, and includes several numbers which could serve as effective encores, such as the perky Uzbek March, or the rousing final Lezghinka, an effective and more authentic-sounding alternative to the famous Lezghinka of Gayaneh. 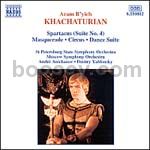