<DIR=LTR align="left">Khachaturian’s Piano Concerto was an ambitious attempt to blend the trans-Caucasian folk music of his hometown, Tiflis (modern-day Tbilisi), with the dramatic virtuosity of a Liszt concerto. Despite a disastrous first performance held on the open-air stage of a Moscow park with an ad hoc group of musicians, the work was subsequently promoted by the Soviet cultural authorities, and it decisively raised Khachaturian’s international profile when it was introduced to London by Moura Lympany in 1940, followed three years later by William Kapell performing its US premiere. Bold and extrovert, Khachaturian’s Concerto soon rivalled even Tchaikovsky’s First in popularity. Its spicy harmonies and colourful orchestration – including within its soulful slow movement a part for flexatone (a ‘singing’ percussive instrument also used by Arnold Schoenberg) – still have the power to excite and intrigue. 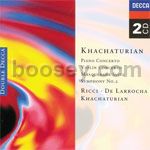