<DIR=LTR align="left">Several of Khachaturian’s individual pieces – particularly dances from his ballets – have served as crowd-pleasing encores. Here is one, though, which is unaccountably overlooked, perhaps because it does not exploit his Armenian style so much as express Khachaturian’s pride in belonging, through his musical training in Moscow, to the Russian classical tradition. Lasting about six minutes, his Russian Fantasy is very much in the style of Tchaikovsky’s Marche Slave. Starting with impressive pomp, it then spotlights a pair of clarinets playing in ruminative style, then gradually builds to a rousing Gopak-style climax. 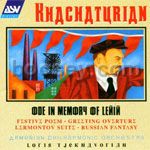