A ‘heavier’ suite with longer movements than its predecessor, Suite No.2 focuses mainly on Spartacus himself, but includes the much-beloved Adagio of Spartacus and Phrygia, which is often excerpted and included with performances of Suite No.1. The other movements include Entrance of the Merchants, which contrasts the decadent Romans (very song-and-dance types!) with the forlorn slaves (soulful and rather Russian-sounding); and, as a lively finale, Dance of the Pirates. 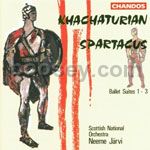