For, unlike Gayaneh, Spartacus is not merely a ballet of dance ‘numbers’, but Khachaturian’s most ambitious stage work, in which he emulated the symphonic style of the best ballets of Tchaikovsky and Prokofieff (particularly of Romeo and Juliet). That said, the entire score is probably best heard accompanying the ballet itself. In concert, highlights from the ballet are often programmed, including four orchestral suites selected by the composers and scenes taking the form of symphonic pictures. A particular favourite – apart from the Adagio – is the sequence in Act II when the Roman general, Crassus, takes decadent pleasure in his slave girls’ dancing, culminating in one of the most powerful numbers Dance of the Gaditanian Maidens and Spartacus’s Victory. 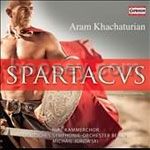