<DIR=LTR align="left">It has been suggested that this quite substantial work, lasting just short of 20 minutes yet packed with incident, is a successor to the Symphony-Poem, though without its bizarre qualities. Khachaturian’s Triumphal (or Festive) Poem offers themes of a more traditional cut, stylistically working within the officially approved tradition of Glinka and Rimsky-Korsakov; there’s even a whiff of Rachmaninoff’s rich romantic style, particularly in a slow noble theme played by the strings, and also some wistful themes akin to Khachaturian’s ballet Spartacus which he was also composing at that time. Yet the final impression is not a dutiful conservatism, but one of the most lively and eventful of Khachaturian’s works – a crowd-pleaser akin to Elgar’s Cockaigne Overture. 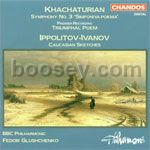