On his death-bed Bartók left a draft of what appears to be almost all of the solo viola part, but debate still persists on whether he really intended a four or a three-movement work. The orchestration is largely Tibor Serly’s although Bartók left fairly frequent short-hand prompts to what
he had in mind. Along with the Walton Viola Concerto, it is among the most popular viola works of all time. The alternative revised edition, by Peter Bartók and Nelson Dellamaggiore, has restored many original Bartók features, but has not fundamentally challenged the orchestration. An adaptation for cello is also available. 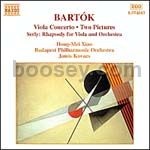