Libretto by Giovanni Battista Giardini (I)

Internationally famous in his day for extraordinary accomplishments in four distinct but related fields - as theorbist, composer, librettist and impresario - Benedetto Ferrari has until recently remained only a name in history books: the man who introduced opera to Venice and thereby also created the first "public" opera. The publication in facsimile (1985) of the three surviving books of solo songs and one duet gave us some idea of the fine quality of Ferrari's lyric gifts, but left us in the dark as to his dramatic style, since all the operas are lost. The discovery that he wrote the text, and perhaps also the music of the celebrated final duet in Monteverdi's Poppea led Alan Curtis to the further discovery of a fascinating dramatic oratorio, preserved in a manuscript in Modena, Ferrari's swan-song. Not only does he bring to life the contrast between the seductive, kittenish, pouting, insistent Delilah and the heroic, dignified, but fatally weak Samson, he also manages to humanize even the allegorical figures of Reason and Sense, in their battle to win the hero's allegiance. The "sleep aria", full of augmented sixths and other langourous chromatics, by means of which Sense convinces Samson to give in to his desires, outdoes in seductive sensuosness even the famous "sleep scene" of Monteverdi's L'incoronazione di Poppea. 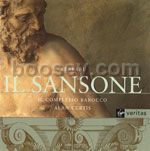