Advance Democracy is a piece of unabashed political propaganda commissioned by the London Co-operative Society. At a time of great anxiety in Europe and on the eve of the second World War, this poem by Randall Swingler paints a dark picture of the threat of dictatorship if democracy doesn’t ‘rise up and cry that what our fathers fought for we’ll not allow to die’. It is a strange piece and its overtly political message makes it quite difficult to programme except as a curiosity. Britten, however, paints a very clever picture with a long legato line moving constantly through the texture from soprano to bass and back much in the manner which he had used in The Three Kings in A Boy was Born. Around this swirling figure the other parts sing sharply punctuated chords which are full of menace. The final section moves into the major (Britten’s brightly flag-waving C major) and the ending is forcefully emphatic.

The best way to perform this piece is to take the words at face value and sing them as Swingler intended, with passion and involvement taking care to really follow Britten’s careful performance instructions as to articulation and dynamics. 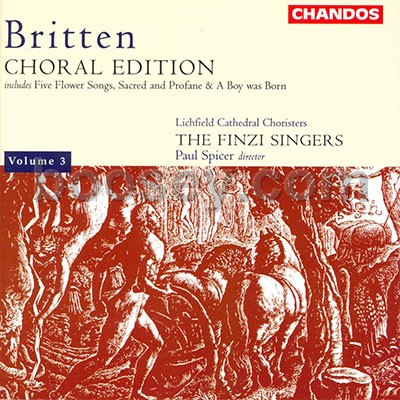