This work was written for the centenary of St. Michael’s College, Tenbury. As so often, Britten uses treble or soprano solos which he indicates should be sung ‘preferably in a gallery apart from the choir.’ Ever the practical composer, however, he also allows that these solo parts can be reduced to one voice or be sung by a small group of voices.

The anthem is an interesting conception and its structure takes its cue both from the early part of Herbert’s text which says: ‘Praise be the God of Love, Here below And here above...’, and the end of the poem which says: ‘Praise be the God alone, Who has made of two folds one.’ It is this division into two which led him into the idea of two groups of singers. It is more than this, though, as the first group, the main choir, has two roles, the singing of energetic phrases in a quicker tempo, and the quiet response to a slower solo line. Having moved backwards and forwards between these two ‘characters’ the choir eventually sings an uplifting ‘fugato’ which builds up a terrific head of steam with the organ part growing into crashing alternate hand chords and the pedals taking wing from the bottom to the top (literally) of the pedal board. A brief silence, and a chorale-like line subsides into a magical quiet ending where the three soloists sing triads to the word ‘one’ whilst the chorus responds with a lower triad on the word ‘two’. The whole thing resolves onto a widely-spaced chord of F major and everyone singing the word ‘one’. A slightly sentimental or glib touch? No, take it at face value after all that has gone before and appreciate Herbert’s imagery. It is a wonderful resolution of the two elements played out through the piece.

As with many other such works, the Antiphon requires an accomplished organist. The choir also needs to be confident both in their notes and rhythm. This is a rarely performed work which should really be much better known and more often performed than at present. It is certainly within the grasp of a reasonably competent choir looking for less well-known music by a great composer. 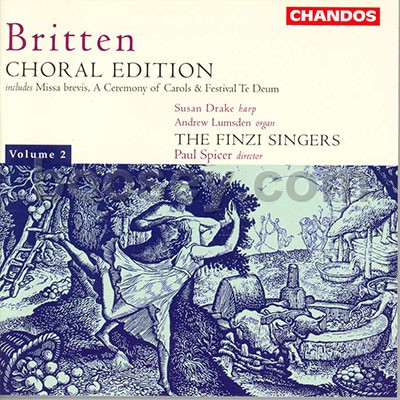