Another product of his working relationship with Auden and the left-wing author, Randall Swingler, the Ballad of Heroes is one of Britten’s most powerful statements from the politicized 1930s, written for the Festival of Music for the People. The Ballad contains many features that clearly anticipate the War Requiem, written 25 years later. Framed by Mahlerian offstage trumpet fanfares, the work includes a final Recitative and in the Choral an impassioned tenor solo over exquisitely melancholy choral harmonies.

This highly dramatic and rarely performed work was written for a Festival of Music for the People and first performed on 5 April 1939 at the Queen’s Hall, London, conducted by Constant Lambert. It is another of Britten’s passionate outbursts against the waste and horror of war which had already engulfed Europe once earlier in the century and was about to do so for the second time. The declaration of war was made on 3 September that year. His choice of texts is highly significant. He had collaborated with Randall Swingler as recently as the previous year on his short unaccompanied choral work Advance Democracy – another politically motivated piece (see separate entry). Both Swingler and Auden were aiming in their poems to goad the downtrodden Englishman into standing up and fully living the life of freedom for which their forebears fought and lost their lives. Swingler’s lines which say: ‘You who lean at the corner and say “We have done our best”, ...To you we speak, you numberless Englishmen, To remind you of the greatness still among you...Your life is yours, for which they died.’ sum up the essence of the message of the piece.

The work is in three continuous movements. First comes a Funeral March (to Swingler’s poem part-quoted above), then a manic Scherzo, a Dance of Death to a rum-te-tum verse by Auden which only increases its sense of the macabre. Finally comes a slow and powerful recitative and chorale and a slow Epilogue in which the funeral march music from the opening returns.

Virtually the whole of the first section of the opening movement is in unison for the chorus. The slow tread of the funeral march is given an added solemnity by this unison singing. The first ten bars are recited on a low C, the next eight bars an octave higher, and after this there is a mixture of simple harmony (more to avoid high notes for low voices) and further unison singing for the rest of the movement. The Scherzo is interesting in setting out the first three vocal parts in a kind of fugal progress. The tenors have the first complete statement in the home key (G minor), the altos are next in the dominant but by themselves, the sopranos are next in line and back in the tonic – again by themselves, and finally the basses have the subject but this time as the basis of a canon at the unison between them and the altos (in a truncated version). The tenors, a major third higher, are followed by the sopranos and then the voices gradually come together to take the music to its first impassioned climax. Short, sharp, quick-fire phrases interrupt the ongoing relentless orchestral progress often referring back to that original musical idea. The music dies out at the end in an exhausted hush.

The third movement introduces the tenor (or soprano) soloist in a highly lyrical accompanied recitative. The choir responds with a simply harmonised chorale which acts as a backdrop to the soloist’s continuing line. This section is unaccompanied and, though simple for the choir, provides the greatest challenge of the work in keeping the pitch up. There are eighteen bars of slow sustained singing here after which a horn delivers the verdict on the success or failure of the choir to keep in tune. After this the chorale material is maintained but with full orchestra support until the Epilogue when material from the opening returns and the choir sings those repeated unison Cs to take the work to its quietly effective ending.

The Ballad of Heroes is straightforward for a choir to perform. The complexity, such as it is, is all in the orchestra. Britten’s instructions as to the possibility of omitting several instruments from the performance make it even more practical (and less expensive). This really is a work to explore and consider programming - it is a sure-fire audience winner. 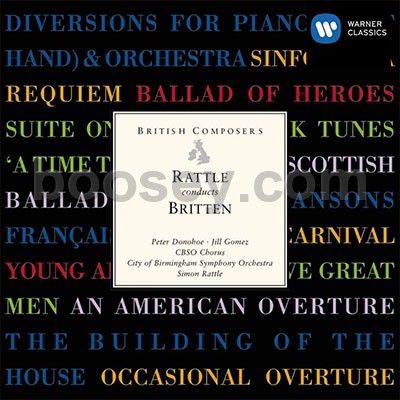