'The Canticle of the Rose' by Edith Sitwell (E)

The five works to which Britten gave the title ‘canticle’ are all settings of texts of a religious or spiritual nature and each is scored for a different combination of voices and instruments. Britten completed his third canticle in November 1954, soon after the first performance of The Turn of the Screw. It sets a poem by Edith Sitwell subtitled The Raids, 1940. Night and Dawn in which the casualties of war are represented through an allegory invoking the Passion of Christ. As with the Serenade composed some eleven years previously, the horn part was written for Dennis Brain who gave the first performance with Britten and Pears in January 1955 at a concert given in memory of the young pianist Noel Mewton-Wood who had tragically taken his own life the previous year. Structurally, the work is one of Britten’s most lucid, being a sequence of free recitatives for voice and piano based on the recurring refrain ‘Still falls the rain’, interspersed with dramatic interludes for horn and piano which are in turn a set of variations on the work’s opening theme. Voice and horn unite only at the very end to represent ‘the voice of One’, resolving the work’s previous tensions. In 1956, Britten incorporated the Canticle into a larger setting of Sitwell’s poetry entitled The Heart of the Matter.


Reproduced by kind permission of the Britten-Pears Library 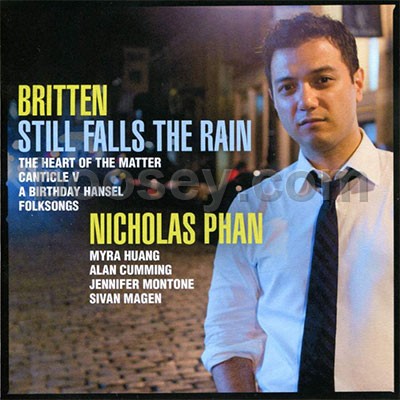