This work had a long gestation as Britten had problems finding a suitable text. Auden was eventually asked and produced the poem in 1940. Britten’s setting was immediately recognised as a major addition to the choral repertory and has since become one of his most enduringly popular choral works. It is a nice coincidence that Britten was born on St. Cecilia’s day (22 November). Cecilia is, of course, the Patron Saint of musicians who is supposed to have sung praises to God as she was being martyred. The story of her manner of death makes gruesome reading and the act of singing in extremis something of a miracle!

Britten responds to Auden’s extraordinary imagery with relish. The poem’s division into three ‘movements’ gives Britten his musical structure, and the provision of a refrain (‘Blessed Cecilia, appear in visions to all musicians, appear and inspire...’) gives a point of reference marking the end of each section, and of the work. The three ‘movements’ are completely different from each other. The first has a kind of ‘ground bass’ moving through it started by the tenors in the first bar and passing between them and the basses. Over this bass, the upper parts sing flowing compound time phrases which are almost hymn-like. The refrain at the end of the verse is a unison version of the initial flowing melody sung by the sopranos.

The second section is a scherzo which gives Britten his ‘middle movement’ contrast. This is marked to be sung extremely quickly. Dotted crotchet 152-160 is almost frighteningly fast! It needs also to be pianissimo and have absolute clarity of words. A feeling of the ‘ground bass’ from the first section returns as a binding motif throughout this section in long notes. All highly effective if well sung. The refrain is a slightly different form of the same melody as before.

The final section is more extended and begins with an ostinato bass which feels slightly menacing. Over this, Britten builds contrapuntal phrases in the upper parts with longer note values. Four solo voices are featured in the next section, most of which are recitative-like to be freely declaimed over held choral chords. The final refrain uses the familiar melody from the opening and brings the work to its quiet end through some challengingly low notes for second basses.

This is a challenging work which should not be undertaken lightly. It needs sympathetic and careful preparation, understanding of the words, a readiness to accept the issues raised by the speed of the ‘scherzo’ movement and an ability to maintain pitch over this time-scale so that the very low notes at the end of the work are not made even lower through a general flattening. Having said all this, it is perfectly approachable by an amateur choir of reasonable attainment providing that enough rehearsal time is allowed for its preparation. The choir also needs to be able to field five confident soloists. Short as the solos are (except for the first soprano one which is more extended and different from the subsequent ones) they present issues which can test a less-confident singer.

The hard work is always worth it as a successful performance of this work is rewarding and memorable. 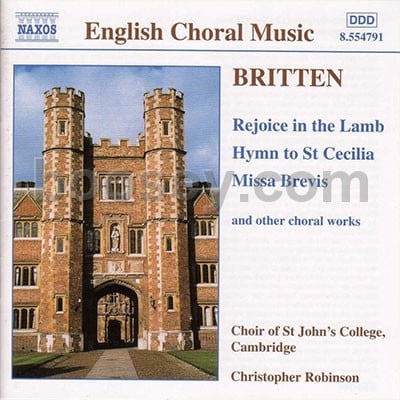