Originally written for the centenary of Peter Pears’ old school Lancing College in 1948, Britten’s cantata tells the life of the fourth-century Bishop of Myra in a work of great poetry and sensitivity. It was conceived and composed with semi-amateur performance in mind and the technical demands of the choral and orchestral writing are appropriately straightforward. The audience also gets to join in two well-known hymns, All people that on earth do dwell and God moves in a mysterious way.

Saint Nicolas (note the name has no ‘H’ in it!) was written for the centenary of Lancing College in Sussex, the independent secondary boarding school on the south coast of England which Peter Pears had attended in his teens. It has a vast chapel intended by its founder, Revd Nathaniel Woodard, as the cathedral for all the schools of his extensive foundation known collectively as ‘Woodard’ schools.

St. Nicolas is famous for many legendary miracles and for being the original ‘Santa Claus’. Crozier’s libretto is designed to tell the story of his life, to recount some of his most celebrated acts and to give the audience/congregation the opportunity of joining in two beautiful hymns at key moments: ‘All people that on earth do dwell’ and ‘God moves in a mysterious way his wonders to perform’. The narration is all done by the choir, though the tenor sings first-person narratives as well in his role as the mature Nicolas. The young Nicolas is sung by a boy in movement II. There is a dramatic moment at the end of this movement when the boy’s voice does a tumble and the tenor proclaims in the voice of Nicolas as a young man: ‘God be glorified’.

The third movement is an accompanied recitative in which the soloist sings of Nicolas devoting himself to God through the agonies and torment of the many distractions and temptations of life. His faith wins through and he sings a final touching phrase: ‘and Love was satisfied’. The sea whips up a storm in the next movement: ‘He journeys to Palestine’. It threatens to overturn the ship and drown everyone on board. There is wailing from the sopranos and altos of the semi-chorus and agonised calls from the tenors and basses to ‘man the pumps’. Finally, Nicolas begs God to let the storm cease and offers thanks for their safe delivery. Britten creates a palpable sense of relief in the final pages.

In the fifth movement, ‘Nicolas comes to Myra and is chosen Bishop’, the choir sings chorale-like phrases welcoming him as their new Bishop. They go through his ceremonial dressing with all the accoutrements of his office, the mitre, crozier (nice pun on the librettist’s name), cope and ring. An energetic chorus ‘Serve the faith and spurn his enemies’ leads to the first great hymn – a wonderfully climactic moment. Britten’s arrangement is suitably uplifting.

But things did not go on smoothly and during the reign of Diocletian and the persecution of martyrs (303-311) Nicolas was imprisoned for eight years before he could resume his pastoral mission among the poor and disadvantaged. The sixth movement is an impassioned picture of those barren years and Nicolas’ frustration at the interruption of his work. In the next movement, probably the best-known section of the work, Nicolas performs the miracle of the three pickled boys lost to their families, ‘slaughtered by the butcher’s knife’. At the end of this movement three boys enter from the other end of the church singing ‘Alleluia’. It is a very moving moment. Continuing this theme, the eighth movement ‘His piety and marvellous works’ is a list of miracles he performed followed by a beautifully simple falling phrase which is sung like a round ‘Let the legends that we tell, Praise him with our prayers as well’. Typical Britten, tuneful, memorable and supremely effective. The final movement tells of Nicolas’ death and the work ends with the other great hymn: ‘God moves in a mysterious way’.

There are divided opinions about this work. Some feel it to be sentimental, while others, like me, feel that it is a genuine and heartfelt response to a text which is aimed at connecting with young people. Typical of Britten is the eminently practical nature of the work. Its orchestration is minimal and the string parts are written to be played by amateurs led, as Britten notes, preferably by a quintet of professionals. He also notes that the piano duet part is not difficult and can also be played by less experienced players. Only the first percussion part should be taken by a professional. He should also play as many of the other instruments as he can. The other parts can be played ad libitum by one or more ‘enthusiastic amateurs’. This is Britten the social musician, the encourager and provider of good new music for the young of all abilities. If some of the music is therefore not what the classical music establishment thought the composer should be spending his time on, we should focus instead on how young performer’s faces light up as they get stuck into the task in hand and involved with the story. It has all the right elements for our ‘Harry Potter’ age: magic (lots of miracles), drama (storm at sea), imprisonment (will he, won’t he get out?), and even a wand – of sorts – in his crozier!

Saint Nicolas is a great audience piece. It forms a meaty work for a half of a concert programme and it involves everybody. It can be produced inexpensively if the minimum of professionals are used: tenor solo, string quintet and percussionist. Even if all the orchestral forces are professional it will not break the bank – a serious consideration in these straitened times. Its greatest challenge is managing the forces and the distances. Britten suggests that the gallery choir (sopranos and altos) has its own conductor which helps. The work can also be sung by almost any fair-sized choir, and can be very effective with a large group.

This work demonstrates to me Britten’s generosity of spirit and his natural feeling for enriching the repertoire at all levels of attainment. What a gift! 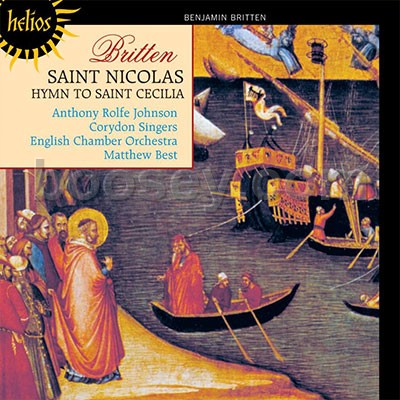