Written at the age of just 18 while he was still a student at the Royal College of Music, the Sinfonietta shows that Britten had already found a mature and unmistakable voice by the time of his official ‘opus 1’. The piece is tautly constructed and shows an assured and sophisticated command of structure that anticipates many later works. This alternative version for small orchestra with two horns was prepared by Britten in February 1936 but given only one performance during his lifetime. 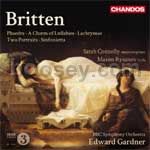