The eight settings of Thomas Hardy, Winter Words, were written in 1953 in between the operas Gloriana and The Turn of the Screw. While in no way sacrificing the abundance of musical invention and imagery found in the earlier song-cycles, the textures are generally leaner and more economical with the result that the text is projected with particular clarity. Among the notable features to be found in the work are the train-whistle noises in Midnight on the Great Western which also come to symbolise the “world unknown” that the journeying boy is travelling towards. In The Choirmaster’s Burial (or The tenor man’s story), the departed master’s favourite hymn-tune ‘Mount Ephraim’ is woven through the texture (though characteristically re-harmonized in parallel triads) with the magical moment when the tenor ushers in the ghostly graveyard appearance of “the band all in white”. In At the Railway Station, Upway (or The convict and boy with the violin), the piano accompaniment is imaginatively conceived as if it were a solo fiddle part with a particularly telling use of musical irony when the handcuffed convict breaks into song at the line “This life so free”, trapped within the confines of an implacably reiterated C major chord. The cycle concludes with one of Britten’s most impressive songs, Before life and after. The impassively repeated triads in the pianist’s left hand coupled with the bare octaves above seem, on the face of it, to be a crudely unsophisticated device, but Britten uses this studied simplicity to symbolise a state of uncorrupted, primeval innocence “before the birth of consciousness, when all went well”. In this final song, Britten’s favourite theme of the conflict between innocence and experience seems to be powerfully and movingly distilled.


The most recent edition of the score of Winter Words includes two additional Hardy settings, If it’s ever Spring again and The Children and Sir Nameless, both of which were originally intended for inclusion in the cycle but ultimately came to be rejected when the final form of the work was reached. These surplus settings are thus now available to be performed and enjoyed but specifically as separate songs and not to be incorporated into the cycle itself.


Reproduced by kind permission of the Britten-Pears Library 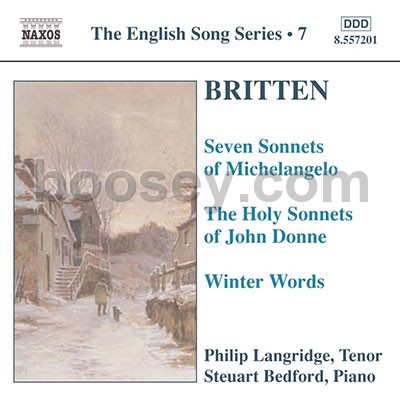