The String Quartet No.5 was completed in late summer 2001 for the Cypress String Quartet. It was commissioned by them as part of their Call and Response series and is in four movements. The first is marked "Measured" and is the most complex of the four.

It opens with a dark introductory phrase for solo cello which quickly expands into arpeggiated figures by the four players. The first principal element is a highly lyrical one taken up by the first violin and viola. It is repeated shortly thereafter in slightly altered form leading to the second principal element marked "with sweep and power." There is an extension of this which becomes a development wherein the first violin plays element number one while the cello responds with the arpeggiated figure first introduced at the very outset of the movement. We are led into a brief third element stated by the cello and picked up by the viola while the first violin continues the development of the arpeggiated figure. The movement is basically one which employs the device of continuous development. Finally, after a long and propulsive section of triplets wherein viola and cello are answered by the two violins and finally all four work in tandem, we are brought to the opening of element two and then a swift race to the end of the movement.

The second movement is marked "Arioso." It opens with a lengthy dialogue between the two violins in the nature of a soliloquy. The aura of lyricism permeates this mood. It begins to alter abruptly with an outburst from the cello marked "menacing" The two violins continue their dialogue for a while longer and there is a brief interlude as if in preparation for the lengthy development of the original "menacing" statement of the cello. This section is marked "Strong, deliberate" and is in striking contrast to the opening lyrical duet between the two violins. As the section loses power and grows quieter the two violins once again begin their romantic dialogue, this time at the very top of their instruments' register. It is like two swallows turning over and over in air, arcing and tumbling. The movement ends with the violins dying away to almost nothing, and the cello punctuating this ending with two surprising plucked figures.

The third movement is the shortest of all, barely two minutes in duration. Marked "Quick, quiet," it is like a zephyr, barely audible in manner. One could compare it, perhaps to a silken thread. The four players are asked to execute all this as fast and silently as possible and ending, if you will, in a puff of smoke.

Movement number four is an explosive one and is marked, appropriately,

"Explosive." It is somewhat akin to a fughetto; the first statement is by the viola, taken up by the cello, second violin and then first violin. A section marked "Slower, broader" is opened by the cello and quickly echoed by the other three members. A brief interlude leads to a re-statement of the section, a short episode, and then a whirlwind new section. While marked "Slower," this is mainly to ensure proper articulation. It is almost demonic in nature. This leads directly to a new section distinguished by sharp, brusque figures taken up by the viola, then cello and finally the two violins. There is a small development of this idea before it all quiets down and all four voices engage in a calm, lyrical interlude. A re-statement of the first section with the cello coming in first followed by the other three players leads quite suddenly and abruptly into the opening fughetto. One by one the four instruments echo the subject, extend it a bit and then bring it all to an explosive close. 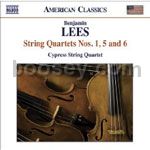