Dr. Futurity for 16 instruments was written in 2012–2013 for the Klangforum Vienna as a commission within the framework of the Erste Bank Competition Prize 2013.

In the time before and during the work on Dr. Futurity, I read several novels and short stories by the legendary American science-fiction author Philip K. Dick (1928–1984), one of the most influential and prolific representatives of this genre. His works were often filmed (for example, Blade Runner), and his influence can also be recognized in numerous movies that do not explicitly refer to him.

In his dystopian stories, frequently set in a post-apocalyptic world, the science-fiction ambient serves mostly only as a backdrop for philosophical-existential and theological questions. Often, the initially depicted reality proves in the course of the story to be an illusion (not seldom drug-induced). Many elements, such as the criticism of the consumer society and the supposedly paranoid fear of the total surveillance state, appear in retrospect to be almost prophetic.

Dr. Futurity is the title of an early novel by Philip K. Dick, a time-travel story. My composition is however not program music. It is rather intended as a homage to the author and linked only atmospherically with individual scenes and elements from his books.

The title of the first movement, ... trip – from Mars to here, is a quote from one of Philip K. Dick’s most famous novels, Do Androids dream of Electric Sheep? The music is predominantly vigorously pulsating and marked by numerous sharp rhythmic contrasts.

The second movement, with the title Chimaera, is tripartite: it begins with the murmur of rainsticks and soft shimmering timbre trills in a quasi-unreal mood. The double bass has a solo in the high register, and a descending horn solo ends the first section. In the middle section appears a seemingly strange cantilena in the oboe d’amore. The third section, in turn, is a varied repeat of the first.

The third movement, Red Alert!, is based on two different elements: on the turbulent beginning in which alarm sirens seem to howl, and on the accordion solo that surprisingly follows. The motivic cells of the latter are then further developed by the ensemble, whereupon follows a reprise of the beginning, which leads to an explosion-like climax. After a descending trombone solo, evoking a “final exitus,” follows a coda initiated by the bassoon in which the two fundamental elements of the movement, alarm signals and accordion solo, merge with one another.
Bernd Richard Deutsch

"In this piece, Deutsch cultivates a delicious mix of logical coherence and creative surprises, integrating traditional sounds (such as alarm bells at the beginning of the finale) in a manner both unabashed and yet original. Sparkling mists of sound, effervescent near-catastrophes, poetic reflection, soli that whine like a mythical creature in one moment and grin ironically in the next: invigorating music full of vim and vigour, a colourful richness of notes, but not one too many and each in its proper place."
wawe, Die Presse, 15 November 2013

"The first movement (… trip – from Mars to here) represents a flickering fabric of pulsating repetitions, scale sequences and beats; it has a polyrhythmic texture and a depth of focus produced by dynamic nuances within the layers of sound. The movement is pervaded by waves of upward and downward runs, shaping up to an element that links it to the other movements, thus bringing to light surprising interrelationships in spite of their contrasting characters: first, with Chimaera, where rainsticks and the strings’ flageolet notes create an unreal atmosphere through which a long double-bass solo and a somehow alien-sounding oboe cantilena wander like ghosts; and finally, with Red Alert!, in which alarm sirens howl in grotesque and surreal ways, sometimes calling to mind Hitchcock and his favoured composer, Bernard Herrman."
Daniel Ender, ÖMZ November 2013 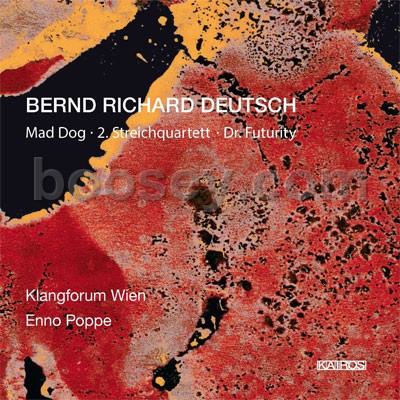