The term "oblique strategies" was coined jointly by British musician Brian Eno and German-born British visual artist Peter Schmidt to describe a series of printed cards they developed throughout the 1970’s. The cards had their origins in sets of uncannily similar working principles that both artists had established independently, and featured aphorisms intended as a means of triggering inspiration or providing useful stimulus during the creative process, particularly when encountering difficulties of fatigue or time constraint.

As Eno and Schmidt wrote in their introduction to the first edition in 1975:

They can be used as a pack (a set of possibilities being continuously reviewed in the mind) or by drawing a single card from the shuffled pack when a dilemma occurs in a working situation. In this case, the card is trusted even if its appropriateness is quite unclear. They are not final, as new ideas will present themselves, and others will become self-evident.

I chose eleven of Eno and Schmidt’s strategies, ordering them in a way that revealed to me a logic and potential inter-relatedness within a hitherto disparate set of single ideas I had assembled for solo cello, each of them in turn a reflection upon the commission’s initial purpose of creating a test piece for the 2014 Emanuel Feuermann cello competition.

It’s my hope then that the resultant composition may provide not only an interesting test of the competitors’ talents but also offer the interpreter an opportunity to reflect upon the delights and pitfalls of creativity as he or she comes to terms with the various musical and technical challenges to be found within these ten minutes of music for solo cello.
© Brett Dean, 2014 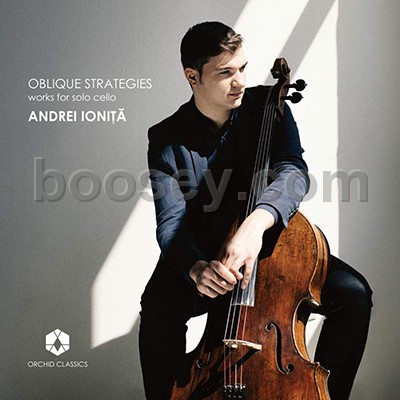