Matthew Jocelyn’s text utilizes not only Ophelia’s own words from Shakespeare’s Hamlet but also words directed towards, or said about her, from the confronting invective of Hamlet’s “Get thee to a nunnery” or his exalted love poem, “Doubt thou the stars are fire” through to the condescending life directives handed out by her father, Polonius (“Best safety lies in fear”; “Do not believe his vows”) and Gertrude’s lyrical description of her suicide. (“There is a willow…”)

Through a suite of five short movements performed without a break, a concise portrait of Shakespeare’s troubled and elusive young character emerges. As we discussed the shape of the work, Matthew and I saw it increasingly as an examination of what remains in our memory and understanding of this secondary, yet utterly pivotal role “after all the Ophelias have played Ophelia.”

Though traditionally portrayed as a meek, even weak character, often dressed in flowing white robes and unable to defend herself before the pressures of Elsinore cause her to snap, I’ve often felt that much of what she says betrays a feistier personality than the one we often are presented. (“And I that sucked from his musicked vows…”)

And perhaps, just perhaps, Ophelia drowns not from a romantically-fed whim or madness, but simply because of the pure weight of the words others say about her caught irrevocably in her pockets.

Hence I sensed the drama of a string quartet complemented by a high soprano voice, at times in combat with the forces around her, at times lulled, accompanied, even defeated by them, formed a suitable musical metaphor for this “ministering angel” and the strange, beguiling spell she casts over us.
© Brett Dean, 2014

“Dean’s jagged vocal writing, and Arnold’s stunning rendition of it, positively boiled with pain and rage. Even submissive lines like “I shall obey, my lord” seethed with barely suppressed anger.” —New York Classical Review 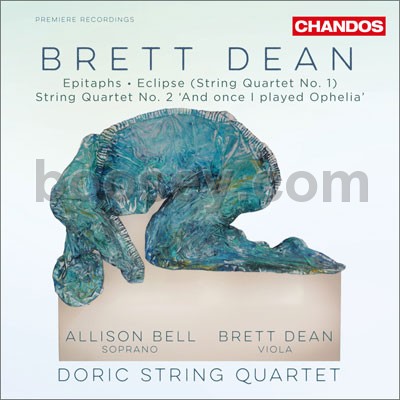