Not only is letter writing becoming a lost art, but one could argue that handwriting itself is an endangered skill. Aspects of my daughters’ education, in particular its heavy reliance on electronic stimuli, have reinforced my view that we are genuinely losing touch with the tactile element of written communication. A recent article in an Australian newspaper points out that the proportion of personal letters amongst the total number of sent articles handled by the national postal authority, Australia Post, has declined from 50% in 1960 to 13% nowadays. Sure, we stay in touch arguably more than ever, via telephone, email and messaging, but that too has undoubtedly changed the nature of communicating.

These were then the initiating thoughts behind my Violin Concerto, ‘The Lost Art of Letter Writing’, co-commissioned by the Cologne Philharmonie and the Stockholm Philharmonic for the esteemed soloist Frank Peter Zimmermann, to whom the work is dedicated with my great admiration. Each movement is prefaced by an excerpt from a 19th Century letter of one kind or another, ranging from private love-letter to public manifesto. Each title refers to the place and year the letter was written. The violin plays the alternate roles of both an author and a recipient of letters, but perhaps more importantly, the solo part conjures something of the mood of each of the different letters.

The first movement “Hamburg, 1854” refers to one of classical music’s great secret romances, that between Johannes Brahms and Clara Schumann. The music itself relates to aspects of Brahms’s own works: the unsettled, 32nd note oscillation in the opening bars, for example, comes from a moment in the slow movement of his Fourth Symphony – an orchestral texture that has always particularly intrigued me. This forms an undulating background upon which the violinist enters the scene as letter writing protagonist, spinning an impassioned and involved missive to an unrequited love. Part of Brahms’ early “Variations on a Theme of Schumann” also weaves its way into the movement.

The second movement, “The Hague, 1882”, is a broad, prayer-like slow movement, and takes its cue from a line from a letter of Vincent van Gogh, reflecting upon the eternal beauty of nature as being a constant in his otherwise troubled and notoriously unstable life.

The third movement, “Vienna, 1886”, is a brief intermezzo, a fleshing out of a movement from my recent song cycle entitled Wolf-Lieder. It is a setting of an excerpt from one of Hugo Wolf’s letters to a close personal friend, again a frank outpouring from a life of affliction.

The final movement finds its inspiration in the famous “Jerilderie Letter” of the Australian bushranger, Ned Kelly. Kelly wrote this letter in the small rural town of Jerilderie in 1879 as a public manifesto in order to articulate his pleas of innocence and desire for justice for both his family and other poor Irish settlers in the North-East of Victoria in the days of colonial Australia. Here the music takes on the character of a desperate ‘moto perpetuo’, hurtling through passages of considerable virtuosity, but always reflecting the sense of impending catastrophe inherent in Kelly’s famous document.

Reproduction Rights:
This programme note may be reproduced free of charge in concert programmes with a credit to the composer.

"Dean is certainly not one of those composers whose works disappear from the repertoire after their premieres... His writing is brilliant and at the same time perfectly playable for the string instrument. Zimmermann indulges in his solo part; he brings the lyrical passages to life with subtle reservation. The Lost Art of Letter Writing is a most sincere and substantial work – it is art which needs neither pretension nor gimmicks." (Shirley Apthorp, Financial Times, 11 Mar 2007) 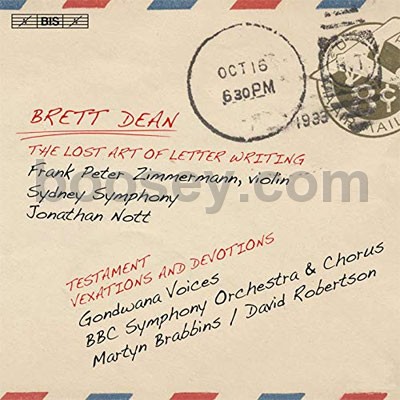