Completed in Indianapolis, Indiana on February 22, 1986, Phaethon is one of several of my scores—including Gorgon, Alloeidea, Morpheus, and the Aphrodite Cantos—which takes its inspiration from ancient Greek mythology. The legend tells of Phaethon, son of the sun god, Helios. The boy, after doubts had been aroused concerning his parentage, secured from his mighty father a promise that he would be allowed to demonstrate irrevocably his divine origins. Helios swore to permit such a demonstration, but he was horrified when Phaethon demanded to be allowed to guide the chariot of the sun across the sky for one day; as Helios had made his oath in the name of the river Styx, Olympian law required that he guarantee his promise.

Once off, Phaethon realized quickly that he lacked the ability to control his father's horses, which dashed madly across the sky. They hurtled too close to the earth, set its land aflame, and dried up its rivers. They raced through the universe and finally threatened even Olympus itself, forcing Zeus to destroy Phaethon by hurling at him a thunderbolt which knocked him from the chariot to his death.

Perhaps the best known musical precursor to Phaethon is the tone poem of the same name by Charles Camille Saint-Saëns. Saint-Saëns' work attempts to relate the entire story, while mine concerns itself with Phaethon's ride only. There is also a darker, more threatening hue to my score as well as a more frenzied ride.

In a disturbingly ironic twist, I found myself on the morning of January 28, 1986 at bar 443 of the work, the measure in which Zeus' thunderbolt knocks Phaethon from the sky, when the space shuttle Challenger exploded shortly after takeoff. Phaethon is dedicated to the memory of Judith Resnik, Gregory Jarvis, Ronald McNair, Ellison Onizuka, Michael Smith, Francis Scobee, and Christa McAuliffe—the seven astronauts who lost their lives that morning when they, too, were knocked from the sky. 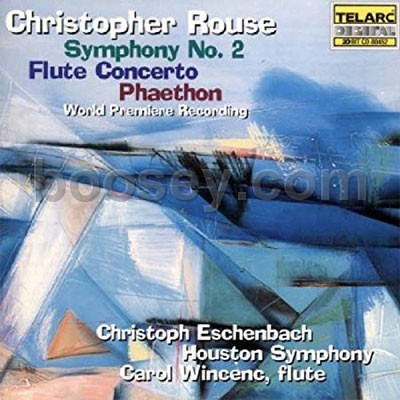