In Memory of a Summer Day has everything to do with Alice’s Adventures in Wonderland—and nothing.

The title is taken from Lewis Carroll’s dedication on the original manuscript of the book (then called Alice’s Adventures Underground). It reads:

“A Christmas Gift to a Dear Child in Memory of a Summer Day.”

The child, of course, is Alice Pleasance Liddell, who together with her sisters, Lorina Charlotte and Edith, enjoyed numerous rowing expeditions up the Thames with Lewis Carroll. It was during these outings that the Rev. Dodgson (Lewis Carroll was a pen name) first improvised the fantastical tales, some of which were later written down (mostly at the insistence of Alice Pleasance) and ultimately published as the Alice books we know today.

In Memory of a Summer Day began as a simple setting of the Preface poem to the second of these books, Through the Looking Glass and What Alice Found There. Gradually, as the piece grew longer and longer, it became for me a kind of evocation of one of those glorious days. Beneath a brilliant sky, upon the river (or perhaps resting on a bank), Lewis Carroll held these three charming children in blissful thrall with his inspired, eccentric, and utterly unique imaginings and stories.

At these moments Carroll’s own feelings must have been vastly more complex than those of the children, the ecstasy of his adoration always tinged by the sad realization of the gulf in years between them and by the knowledge that all too soon they would grow up. In any case, my evocation of the day tries to capture the varied sentiments and feelings of both child and adult.

The entire text for this hour-long piece is but this one Preface poem—“Child of the Unclouded Brow”—sung by the soprano in two contrasting settings. These are separated by and orchestra movement (Triumphant Alice) describing one of Carroll’s stories—one that didn’t get written down and incorporated into the Alice text. It is, as it were, a chapter from Alice’s Adventures in Wonderland that got away. In this sense, then, the piece has nothing literally to do with the book—only with the circumstances and feelings I imagine were involved in its creation.

The piece begins with an Introduction, which (perhaps) suggests dawn, the freshness of early day—time before the trip on the Thames. It includes a Cadenza for the soprano.

The setting of the poem in Simple Alice, as the title implies, is meant to suggest child-like innocence, the fresh, unspoiled charm of youth—poetry as understood by a child (verses 1-3). Only in the fourth verse, where Carroll clearly interjects a pensive, almost bitterly sad note, does the tone change. The verse closes with this (to me) touching couplet:

We are but older children, dear
Who fret to find our bedtime near.

"Bedtime" suddenly suggesting Death—or at least I have set the line so.

After a long interlude, the happy mood returns (verses 1–3 in a varied repeat) and verses 5–6 bring the setting to a quiet close. It is interesting to note the use of the phrase “happy summer days,” which is Carroll quoting himself—the last three words of Alice’s Adventures in Wonderland. The trumpet line at this moment quotes a melody from Final Alice, which is heard in that piece just after these same three words are spoken—so we are quoting ourselves “in concert,” as it were.

A Tale is Told: Triumphant Alice begins without pause and is an elaborate, extensive March. As in all proper Marches, the Trio follows next, then a grand reprise of the March, and finally an even grander Coda.

Like many of my pieces, this movement began chastely, but grew (Wonderland-style) to alarming proportions. As a boisterous Scherzo is to a courtly Minuet, so might my…well, Super-March seem to more familiar specimens of the genre!

Rather than the usual military associations, the piece suggests to me the brightness of mid-day—with certainly a blazing sun over head reflecting dazzlingly, blindingly off the water’s surface. If the energy-equivalent of the Marcia were converted into an actual tale told, however, that rowboat would certainly have capsized!

Interlude grows out of the March’s (surprisingly) quiet ending, and suggests Carroll’s more pensive thoughts. Moreover, everyone is a bit tired by now for it is past mid-day, and I can imagine them stopping at a bank of the river to rest. Eventually they all fall asleep.

Ecstatic Alice, then, is Carroll’s dream, a dream of love. It is a second setting of the poem, colored entirely by this infatuation. What he could not express—even perhaps feel—waking is now given full, romantic rein. The key change, too, is significant. Both Simply Alice and the Marcia were in A Major. Here suddenly the key goes up a half-step to B-flat Major, a release from earth-bound A!

Ecstatic Alice is an Aria in the grandest sense of the word; beginning with yet another version of the Simple Alice melody, it soars eventually to a Liebestod-like climax, subsiding then into quietude.

It is difficult to characterize the final pages of the work: I could do no better than Postlude, though I thought also of “Fantasy-Finale.” Initially the orchestra takes up the last strains of Ecstatic Alice and treats them most tenderly. Little by little, though, the music grows into a majestic statement of the Alice melody, then gradually ebbs away. The mood is suddenly interrupted by a shocking chord (The Angel of Death passes near…”). But quiet returns and in the most tender manner possible the soprano sings a remembrance of the Ecstatic Alice, with the words “happy summer days” as the pianissimo climax.

Despite its length, In Memory of a Summer Day is but Part I (though certainly the longest part) of a three section work I call Child Alice. In the complete version Part I comes to a surprisingly abrupt conclusion and is followed by an Intermission. For a separate performance of In Memory of a Summer Day I have written a Concert-Ending, which brings things to a more just and, for me, characteristic conclusion. Based on the most complex chord of the piece—a combination of A and B-flat major triads—the ending comes, after considerable struggle, with the B-flat Major falling exhaustedly into A. The piece closes, then, with a remembrance of its very opening.

In Memory of a Summer Day was commissioned by the St. Louis Symphony for its Centenary Season, and is dedicated to its music director, Leonard Slatkin. 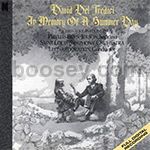