Magyar Madness is a 35-minute Clarinet Quintet in three movements of wildly varying lengths. The first, "Passionate Knights," is 11 minutes; the second, "Contentment (Interlude)," a chaste 4; and the finale, "Magyar Madness," a whopping 20 minutes long. The work, commissioned by Music Accord for David Krakauer and the Orion String Quartet, is also dedicated to these remarkable artists.

The idea of creating a finale that hugely overshadows prior movements was inspired by an incident early in my composing career: The Juilliard String Quartet were performing the Beethoven opus 130 Quartet — but with a twist. The usual finale was replaced by the nearly 20-minute-long Grosse Fugue, opus 133, which (it turns out) was the finale Beethoven had originally intended for the piece. (Because the Grosse Fugue was so bewildering, Beethoven's friends after the premiere persuaded him to write a shorter, more conservative, finale — which, surprisingly, Beethoven did. And so the quartet has since been played.) When I heard the Juilliard's reconstitution of the quartet, I was electrified. The enormous finale changed everything. Earlier movements that had seemed substantial were now dwarfed. All the weight of the piece had shifted to the end, making it seem that the best had been saved for last. As an example of musical design, this experience stayed with me. (In fact, I used the same device in my String Quartet No. 1.)

I. "Passionate Knights"
The first movement begins with a fiery clarinet cadenza punctuated by strings and leads to an impassioned main theme. Moving through a series of contrasting motives — some perky, some dramatic — the movement divides into two halves, the second of which is a varied reprise of the first (like a sonata form without a development). The lengthy, dramatic coda then acts as a kind of development and leads to a second, more reposeful clarinet cadenza and a calm ending. This was (one could say) a knight well spent.

II. "Contentment (Interlude)"
The short, quiet movement that follows is for muted strings alone. It is, in essence, a transcription of a song I wrote in 1998 for piano and baritone. The music — sweetly ardent, lyrical and contented — belies (perhaps) the text I set: a poem by Edward Field entitled "Street Instructions: At the Crotch."

David, a specialist in klezmer (Jewish folk music of Eastern Europe), asked me to write something using that melismatic style. I told him, "Oy vey! Klezmer I can't do, but Hungarian I'll try." What I had in the back of my mind was Schubert's four-hand masterpiece, Divertissement a la Hongroise, opus 54. In this piece, not only does Schubert give the harmony an oddly ethnic seasoning, but in the last movement — a rondo he introduces a quasi-Gypsy device that intrigued me: Each repetition of the theme is increasingly ornamented, and the accompaniment grows more and more animated. The illusion is that the tempo is accelerating — a wonderful way to enliven what is, after all, mere repetition. The idea of literally speeding up each appearance of a theme over the course of an entire movement — of creating a goulash of musical frenzy — gripped me.

The finale begins with the clarinet's return in a virtuosic cadenza. The music then settles into a "Hungarian" rondo-theme in G-minor, made up of even quarter-notes over a steadily oscillating accompaniment. This rondo-theme at its next repetition is systematically shortened. What were uniform quarter-notes are now, in alternations, quarter-note / eighth-note, quarter-note / eighth-note, etc. The effect is increased agitation. A third statement is faster still — twice the opening speed. Quarter-notes are now replaced by eighth-notes. Even more frenetically, the theme is further reduced to eighth-note / sixteenth-note, eighth- note / sixteenth-note, etc. And finally, fastest of all, at four times the speed of the opening, there is a frantic version of the theme in running sixteenth-notes.

Amid the ever-accelerating rondo sections are three contrasting episodes. The first — boisterous and energetic — is capped by a dramatic reprise of the movement's opening clarinet cadenza. The second episode, in complete contrast, is (as the score says) "music from afar" - mysterious and pianissimo throughout. To that end, I ask the strings to use especially soft "practice" mutes and the clarinetist to play from off-stage. The third episode, which follows the second immediately, is wild and barbaric with (like dashes of paprika?) hugely virtuosic clarinet flourishes — bringing out, to borrow from Cole Porter, "the Gypsy in me"!

As a coda and calming antidote, the rondo-theme reappears quietly — now, for the first time, in G-major — while the clarinet trails behind in canon. Eventually, though, the music rouses itself to close in a "proper" Hungarian frenzy. 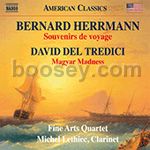