I think a lot about ghosts. Not so much in the literal sense of sheet-wearing specters, but rather, of things ghostly in function. That is, things that remain behind as the fleeting evidence of what once was. For some reason—perhaps for the same reason as the monk of old’s memento mori—I have always felt the need to surround myself with these kinds of ghosts. The studio where I compose, for example, is full of mementos: objects from past projects, trinkets from past travel, and most notably, old photographs. I have collected these antique photos for about ten years, not for the photographic quality—I know little about photographic history—but for the mysterious stories they may tell of the people whose images they hold. They are, in a sense, my ghosts.

They lived full lives once upon a time, these people. They had husbands, wives, children, joy and pain. They were no different, really, than you or me. And yet here they are, preserved in a single moment—perhaps the only evidence of their existence—itself gradually fading. I have no idea who any of them are, specifically, but it doesn’t seem to matter. In a certain sense, they each are all of us.

Although this peculiar passion of mine is at the core of this composition, it’s not really what the piece is about. Rather, the "ghost" here is an atrocity that happened long ago, the memory of which I just can’t seem to shake. Specifically, it is the massacre at El Mozote, El Salvador, December 10th through 12th 1981, in which an entire village was erased by US Military-trained Salvadoran government forces, with American-made and provided arms.

Now, I have no interest in getting on a soapbox about El Mozote, or related issues; that is, in fact, the last thing that I want. It’s just that since reading about the massacre—first in Bob Ostertag’s Creative Life, and later in Mark Danner’s The Truth About El Mozote—I have been plagued by two questions: First, how did I never know that this had happened? (The answer to this is fascinating and upsetting.) And second, why am I completely unable to get it out of my mind; to move on? It haunts me. It has been, for the last 15 months, my ghost.

I cannot forget the story of the young boy—now known only as "No. 59,"—who was lucky enough to have a toy, though it could not protect him from the bayonet. I cannot forget the separation of families that happened on the morning of the second day—men to the right, women and children to the left—reminiscent of another atrocity, forty years earlier. I cannot forget the girl on La Cruz, a local hill, who is said to have sung a hymn as soldiers repeatedly raped her. Legend holds that even after they murdered her, her body kept singing, stopping only when they cut off her heard. I cannot forget that this village, innocent by virtually every account, was slaughtered, caught in the crossfire of a stupid ideological battle.

I would never say something so boldly reductive as "their blood is on our hands." We all know that scenarios like these are neither that simple, nor all that unique. But I know that I have been unable to shake this ghost, and consequently felt that I had no choice but to write this piece.

What we know shapes us, and whether I like it or not, I now know this.

“It’s this level of nuance that makes Haunt of Last Nightfall so compelling as an invitation to contemplation versus confrontation. There’s the violence of electric guitar drones (pre-recorded by Andrew McKenna Lee) cutting through marimbas and chimes. But there are also meditative moments, threaded with an embroiderer’s skill throughout the din of battery drums: Samuel Barber’s Medea by way of Beyonce’s Homecoming.” —The Log

"Little’s background as a drummer tells in his masterful writing for percussion. He organizes his orchestration via tuned and untuned instruments. He elicits shimmering, heavenly textures with his juxtapositions of crotales, glockenspiel, and vibraphone lines and creates foreboding and danger with the full gamut of drums tuned to offer a harmonic consensus. Without text, Little offers the listener a narrative journey much in the vein of a silent-film score. Our attention never falters. Little’s agility across the range of percussion instruments is evident in his color-driven soundscapes.?—Classical Voice North America 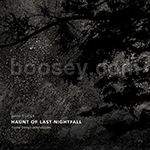