If the First Cello Concerto has become a virtuoso favourite with audiences, the Second remains more mysterious. On a grander scale, darker and more disturbingly orchestral than the First, it has been described by one authority as ‘a symphony with obbligato cello’. The composer himself thought of calling it his Fourteenth Symphony. At the same time, its wildly difficult writing for the solo cello the Second Concerto is – just as in the First - a tribute to the artistry of Shostakovich’s friend Mstislav Rostropovich.


The concerto begins with the cello alone moaning in the deepest part of its register. Gradually the rest of the orchestra creeps in and the main part of the first movement unfolds into the broadest of serious utterances. Next comes a wild scherzo partly based on the old Odessa cabaret-song ‘Bubliki, kupite bubliki!’ (‘Bagels, buy my bagels!’). This old song, saucy, cheap, vulgar and indecent (the young lady singing has more to offer than bread rolls), was a private joke between the composer and the cellist going back to the previous year’s New Year’s Eve party when guests had played a game of choose your favourite piece of music and Shostakovich had teased the others by picking this tune. The magnificent last movement begins as an accompanied cadenza, terrifying in effect, and then launches into a hysterical dance of death. At the climax the orchestra takes over, drowning the cello and shrieking out the bagel song with almost demonic force. 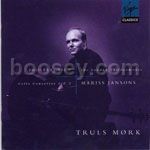