Shostakovich’s evergreen first piano concerto, scored for the unusual combination of a string orchestra and solo trumpet, was written for himself to play and is designed to show off all his distinctive strengths as a pianist: brilliance and lightness of touch, dry humour alternating with a treacly almost jazzy sweetness, occasional moments of virtuosic strength, and the ability to switch in an instant from one dramatic character to another.


Full of jokes and parodies of the great classical masters like Haydn and Beethoven, this is a wonderfully boyish and light-hearted work that has retained a constant place in the concert repertoire, most of all for the infectious pleasure that it affords both to audiences and to performers. Each of its four movements has its own distinctive colour and unpredictable shape and the whole piece is over in around 20 minutes. 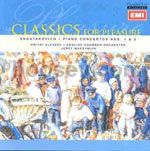