Shostakovich’s Second Violin Concerto is a far more introverted piece than the First. Still on a grand time-scale, it seems written from a different place. Gone are the instantly memorable images, the brightly etched colours and corruscating ferocity. Instead we find ourselves in a world of half-lights, confessions and deceptions.


Harmonically and thematically this is one of Shostakovich’s most complex and unpredictable pieces, but it still grips the listener and the key is the way that the composer created here for his friend the violinist David Oistrakh an endlessly flexible and expressive solo line, like the song of a pilgrim wandering through a strange land. Throughout the first movement, for instance, the violinist simply sings and sings, leading the orchestra along behind to echo and catch his every nuance.


The effect is less like a traditional concerto and more like a sonata where the soloist just happens to be accompanied by an orchestra. This same unusual balance is continued in the second movement, in which the soloist hardly pauses even for a single bar but unwinds a seamless and almost folksy thread of sound, often supported by the orchestral strings and occasionally counterpointed by woodwind instruments. In the middle of this slow movement there is a dreamlike reminiscence of a waltz. The finale is a wild symphonic cancan which twists and turns in every direction before eventually leading to a huge cadenza. Most cadenzas are about glittering effects but this one is about making the violin explore the very stuff of the notes. The impression is not so much Paganini as Bach. 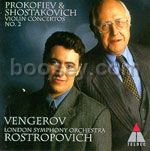