These songs were almost the first serious music that Shostakovich wrote in the wake of the disastrous political attacks on him in 1936 and the banning of his 4th Symphony. Setting haunting words by the greatest of all Russian poets, they fascinatingly reflect both his gloomy personal situation and also his struggle towards a new and simpler musical style. Each of the four songs examines the themes of betrayal, loss and memory. In the first, the artist compares himself to a great painting that has been daubed over by a barbarian. Then comes a bitter-sweet poem of amorous betrayal. In ‘Foreboding’, the poet asks his beloved to remember him as he faces the trials ahead. And in the last, a grandiose funeral march that recalls Musorgsky’s ‘Boris Godunov’, he imagines his future death and wonders where his grave will be.


Soon after finishing these songs, Shostakovich began work on his 5th Symphony, in the last movement of which he actually quotes from the first song of this cycle to powerful effect. 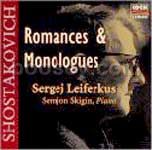