1967 was the Fiftieth Anniversary of the Bolshevik Revolution and all artists in the Soviet Union were expected to contribute to the celebrations. Shostakovich’s principal offering was this 13 minute symphonic poem, one of his least-known orchestral works.


It is written in the full-blooded film-music style he used for many of his official works, full of meaty heroism, thick orchestral textures and tubthumping climaxes, all suggesting the then traditionally acceptable ways of publicly commemorating the revolutionary events of 1917. The quieter central section reworks a catchy ‘Song of the Partisans’ that Shostakovich had written in 1937 for the film ‘Volochayev Days’, which tells of the epic fight of the early Bolsheviks against a Japanese invasion in the Far East in 1918. What makes ‘October’ most worth performing however is the curious way that its official grandeur is several times offset by moments of emotional darkness and a strangely convoluted musical argument that harks back to the Tenth Symphony. 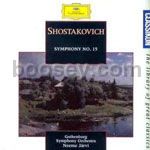