This charming eight-movement suite for full orchestra was compiled by unknown colleagues of Shostakovich – possibly in the 1950s - from his film and stage scores. For some years it was misidentified as the Jazz Suite No.2  and has been recorded under that incorrect title, and performed many times. A waltz from this suite was used in the sound-track of Stanley Kubrick’s last film Eyes Wide Shut. 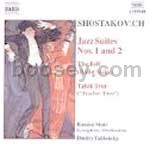