Shostakovich scored one of the greatest public triumphs of his life with his wartime Seventh Symphony. The first three movements were written in Leningrad in the late summer of 1941 as the Nazi armies encircled the city. After the composer and his family were evacuated by air to Kuibyshev, he completed the finale. The first performance in Kuibyshev in early 1942 was a patriotic triumph. Within weeks a microfilm of the work was flown out through Teheran to the other allies and there swifly followed performances in the UK and the USA, which achieved far more than the usual notice allotted to a piece of orchestral music. This symphony had become a cause celèbre, part of the Allies’ propaganda effort directed towards encouraging a sense of shared suffering and the messianic necessity of removing defeating and destroying the evil of the Axis powers. Thanks to all this publicity, Shostakovich became a household name in many countries even among those who had never been to an orchestral concert in their lives.


Probably the most famous performance of this symphony took place on 9th August 1942 within the besieged city to which the piece was dedicated. The conductor Karl Eliasburg conducted what remained of the musicians of the Leningrad Philharmonic in a concert staged as an idealistic act of defiance against German aggression and barbarism.


Having been so praised to the skies, this work, which is vast and bold in its neo-Mahlerian aspirations (it lasts approximately 80 minutes in performance), was fiercely inevitably attacked once the war was over. Many commentators accused it of being banal, vulgar, over-inflated, crudely patriotic and no better than cheap film-music. It was predicted that it would soon disappear from concert halls. That prediction has not been fulfilled. While certainly not to everyone’s taste, this music has turned out to be far more powerful even than its initial popular success would have suggested. Partly this is because of Shostakovich’s magnificently energetic sense of drama – like that of a great film director – and partly it is because of the music’s disturbing ambiguity. Throughout this symphony there is a genuinely powerful and profound sense of the unknown which drives the music forwards and makes its quite impossible to dismiss it as one dimensional and occasional patriotism. Far from it. Audiences all over the world still find this work disturbing and moving. 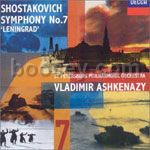