Shostakovich’s Eighth Symphony is one of his grandest and purest symphonic utterances, and is considered by many to be one of his finest works. Written during the summer of 1943 when the battle between Hitler’s Germany and Stalin’s USSR had turned and the Nazis were beginning their retreat, it is not at all a triumphant piece but rather a tragic utterance on the broadest scale. Clearly at some obvious dramatic level it is a response to the horrifying events of the war. But it is a piece whose significance can be read in many ways and not just in terms of its dreadful historical context.


The work is cast in 5 highly contrasted movements (the model here is clearly Mahler) which taken together form an enormous lopsided arch. These movements sound very different but nearly every note of them grows with remorseless logic out of the very first bars at the opening of the symphony. To some extent, the first and last movements reflect one another, the finale recapitulating a number of ideas from the first movement but in a strikingly different way. In between come a pair of scherzos (echoes here of the double scherzo of the Sixth Symphony op.54). The first of these is a stormy and thunderous reworking of music first used in the Second Jazz Suite of 1938; but here music that had been trivial and entertaining becomes a frightening dance of death. The second scherzo – and the central movement of the symphony – is a relentless nightmare of a moto perpetuo, whichn sounds as though the composer’s imagination has been caught in the wheels of an unstoppable machine. The fourth movement is a monumental passacaglia, where the repeated ground-bass is taken from the openings bars of the first movement.


At the end of the finale, Shostakovich writes a long and painfully mysterious coda which is clearly a reworking of the equally mysterious coda to his earlier Fourth Symphony op.43, which at the time when he was writing the Eighth was still a forbidden work and pretty much unknown to anyone except the composer. 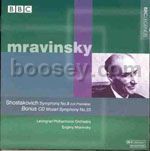