After the mighty Seventh and Eighth symphonies, Shostakovich was under pressure from his Soviet lords and masters to mark the end of World War 2 with a grandiose oratorio-symphony in praise of victory. He never wrote such a piece, though he did begin a large-scale tragic symphony which he quickly abandoned. Instead, to the anger of the cultural commissars, he chose a quite different path, offering in the Ninth a far more ambiguous celebration of this historical moment. This is one of his most neo-classical orchestral scores, written for relatively small forces, and sparkling with wit and mockery and hollow laughter which, from time to time, unexpectedly and shockingly gives way to moments of weirdly clownish grief. The overall effect is deeply personal and poignant.


Now that the old Soviet official anger at this piece has long since died away, we can see that this is one of the composer’s most subtle and fascinating symphonic creations. After a first movement that looks back to Prokofiev’s Classical Symphony in its combination of Haydn and circus-music, there is a melancholy slower movement like a stumbling waltz, with haunting melodies in the woodwind like strands of ivy. A brilliant scherzo collapses suddenly into the oddest music in the piece, a dramatic recitative for solo bassoon alternating with brass refrains, after which the neo-classical hi-jinks – always short through with sadness - return and the symphony ends with curious suddenness, like a cork flying violently out of an enormous champagne-bottle. 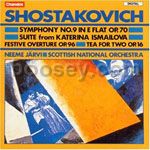