Accompanied by one of Shostakovich’s most popular and accessible film-scores, The Gadfly was a highly successful film inside the Soviet Union in its day, a sugary and entertaining costume drama based on a once very popular historical novel by the English writer Ethel Voynich, like a cross between ‘The Three Musketeers’ and ‘The Scarlet Pimpernel’. The hero is a swashbuckling revolutionary in Risorgimento Italy and the 1830s/1840s Italian setting gives the composer a chance for delicious pastiches in the style of Bellini and Verdi, as well as pseudo-Neapolitan songs and folk-tunes. Most famous are the catchy Galop and the syrupy Romance, which have been recycled many times in TV shows and advertisements and will quickly appeal to those who prefer their music on the lighter side. 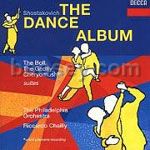