A 6 Letter Letter was composed to be played as a surprise encore at the conclusion of a concert given in Basel, Switzerland, April 27, 1996 to celebrate Dr. Paul Sacher’s 90th birthday and the 10th anniversary of the opening of the Paul Sacher Foundation. As the concert concluded with a performance by Heinz Holliger of my Oboe Concert, I decided to write Holliger an encore using his English horn. This short solo was composed in New York, during March, 1996 and uses only the six pitches associated with the name Sacher 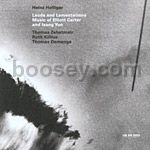