My Asko Concerto for sixteen players features each one of them participating in one of the following groups—two trios, two duos, a quintet or a solo. These six sections are framed by the entire group playing together. Although the music is in lighthearted mood, each soloistic section approaches ensemble playing in a different spirit.

The score was commissioned by the Dutch Asko Ensemble from Amsterdam that has performed so many of my works. It was composed largely during January 2000 in New York City.

Reproduction Rights
This program note can be reproduced free of charge in concert programs with a credit to the composer. 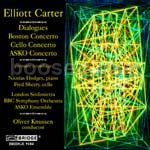