When asked by the Ensemble InterContemporain of Paris, which has performed repeatedly a large number of my works to write a second piece for it, I decided on a clarinet concerto, knowing how wonderful an artist its clarinettist, Alain Damiens, is. Besides, many clarinettists who had played my works and liked my writing for the instrument had been asking me for a concerto.


To my mind, the soloist in a concerto must be heard clearly whenever playing, so I was especially interested to write for a smaller group the Ensemble InterContemporain proposed which could be taken on tour. Its main problem is that it is composed of only five solo strings and then many other instruments that cover them easily. Thinking this over, I decided to divide the work into six short sections, each separated by a tutti, associating the clarinet with a group of instruments of similar sound adding a seventh in which the entire orchestra participates. Thus, after a brief tutti, the clarinet is associated with the harp, piano, marimba, vibraphone and in the next section with the unpitched percussion and so on. Each section, of course, has its own expressive character and also forms a foreground for short comments by the other parts of the orchestra.


This work was first performed in Paris by the clarinnetist, Alain Damiens and the Ensemble InterContemporain (to whom it is dedicated) conducted by Pierre Boulez at the Cité de la Musique on January 10 and 11, 1997. It was part of a concert celebrating the 20th anniversary of the Ensemble. 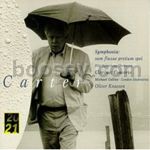