One of the fascinations of attending rehearsals of chamber music, when excellent players try out fragments of what they later will play in the ensemble, then play it, and then stop abruptly to discuss how to improve, is that this pattern is so similar to our inner experience of forming, ordering, focussing, and bringing to fruition — and then dismissing — our feelings and ideas. These patterns of human behavior form the basis of the 5th String Quartet. Its introduction presents the players, one by one, trying out fragments of later passages from one of the six short, contrasting ensemble movements, at the same time maintaining a dialogue with each other. Between each of the movements the players discuss in different ways what has been played and what will be played.

In this score the matter of human cooperation with its many aspects of feeling and thought was a very important consideration.

String Quartet No.5 was composed during the winter and spring of 1995 in New York and Southbury, Connecticut, and was commissioned for the Arditti Quartet by Antwerp, City of Culture, 1993; Wittener Tage für Neue Musik; Festival d’Automne à Paris; and Lincoln Center, New York.

“This deeply human piece is like a love letter to the art of chamber music. With hazy harmonics, crunchy rolled chords and metallic plucks, the series of short movements and interludes conjures rehearsal conversations in which someone offers an idea or a demonstration of how a passage should be played, and the rest respond. The final measure, a violinist’s harmonious double stop, suggests eventual agreement.” —New York Times 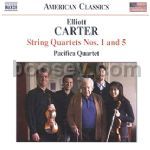