Libretto by Antonio Salvi (I)

The edition presents the essential 1734-5 Ariodante in a rigorously scholarly text, but one intended for those primarily interested in the music itself, and in the practical elements useful for performance, including articulations, when they can be determined from the sources, that are useful in deciding bowings, plus the indication of recommended appoggiature in both recitatives and arias, and the addition of bass figures for both recitatives and set pieces. It also provides a text that has been tested in rehearsal, performance, and recording, during which even the smallest details have been corrected and made consistent. There is, moreover, the advantage for performers that this edition is not limited by the rules that a series intended primarily for scholars may impose. For instance, though Handel was forced to postpone until his next opera (Alcina) the splendid ballet that, in a stroke of dramatic genius, he composed to follow Ginevra’s final aria of Act II, we do not relegate it to an appendix, but include it in the main text. We also choose for the main text the much finer of the two alternate second-act arias for bass.
Alan Curtis 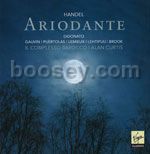