The Latin text of the Gloria is an ancient hymn of praise from the Christian tradition derived from the song of the angels who announce the birth of Jesus, as recorded in the Gospel according to St Luke. The Gloria has formed part of the Ordinary of the Mass for many centuries, and in that context has been set by many composers; there are also independent settings by Handel, Vivaldi and Poulenc. But the opportunity to work with such an iconic text also afforded me an opportunity to explore how other religions perceive the Divine. This is an ongoing feature of my work, from the multi-faceted The Armed Man: A Mass for Peace, the Japanese haiku in my Requiem to the ancient Arabic text in my Stabat Mater.

My setting of the Gloria uses the Latin text in the first, second and fifth movements, ‘The Proclamation’, ‘The Prayer’ and ‘The Exaltation’. Other, related Biblical texts appear in the middle movements. The third is called ‘The Psalm’ and sets Psalm 150, a psalm of praise sung in Hebrew (though it may alternatively be performed in Latin). The fourth movement, ‘The Song’, is my own English adaptation of verses from Deuteronomy, Psalm 144 and the First Book of Chronicles.

Between these movements are readings I have chosen from the texts of other ancient religions, performed in chronological order of their establishment. The texts focus on each religion’s concept of the divine or the Ultimate Reality, eternal and unchanging. This concept is a unifying feature of all world religions, commonly defined as a personal and loving God or as an eternal truth that governs the universe.

Hinduism: an excerpt from the Bhagavadgita (Song of the Divine), the classic Hindu scripture
Buddhism: the last lines of the Diamond Sutra, the world’s oldest dated printed book
Taoism: the opening of the principal Taoist scripture, the Tao Te Ching (The Classic of the Way and Virtue)
Islam: the first chapter of the Qur’an, known as ‘Al Fatiha’ (The Opening), which is recited in Muslim daily prayers

The Gloria is scored for choir and orchestra with the addition, common to my work, of ethnic percussion instruments, indigenous to those cultures mentioned above. 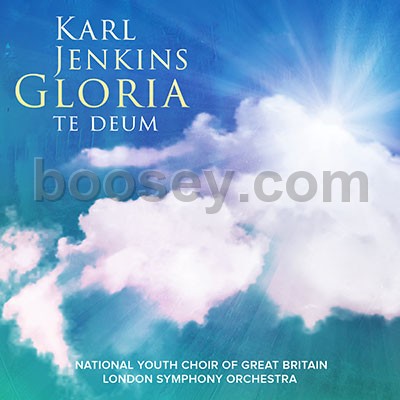