The course of the cello concerto was influenced by an inconsistent strategy: I had wanted for once to write a piece of linear development without construction plans, but after about twenty pages fear overcame me. I turned my back, lost my innocence, but found that I had intuitively followed a method of exclusion and thus two notes had so far provided little influence on the work’s harmonic development. I now included them with their full significance and, with them, created a 12 tone series from which the piece's harmony and melody is derived. The chromaticism is gradually filtered away during the concerto until finally only diatonic scales remain, providing the material for a small "Webernised" Pop-Song in D major/B minor. Regarded in this way the piece is related to my Violin Concerto No.1 and in both works the different tempi are derived from individual rhythmic structures.

The range of the cello is superior to all other strings. It has a singing quality from the bass register right up to that of a coloratura soprano with potential for the most expressive energy. Yo-Yo Ma demonstrated such possibilities to me when we met in April 1989 in Munich. When I pointed out that I wanted the cello extremely high, he responded "Why not still higher?" and improvised cantilenas well over the end of the fingerboard, like a musical Flight of Icarus. These impressions were worked into a theatrical climax to the piece, when the solo cello reaches an extremely high F and then falls over its entire compass to the open C, the lowest sting of the instrument. 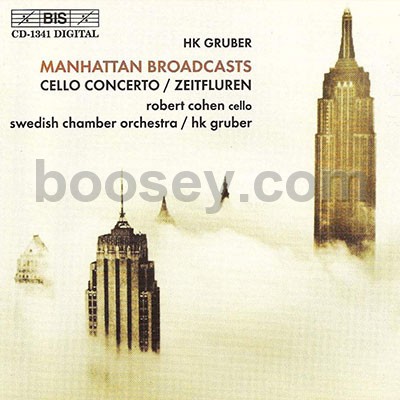