When Górecki died in 2010, few knew that there were several unreleased pieces in various stages of readiness. First to emerge were Symphony no.4 (2006) and Kyrie (2004-5), both premiered in 2014, followed by Sanctus Adalbertus (1997-8), which will be premiered in Kraków on 4 November 2015. While much of the Symphony required orchestrating - expertly carried out by the composer's son Mikolaj, himself a composer - the two choral works were almost ready for publication.

Sanctus Adalbertus is a successor to Beatus vir (1979), which he wrote in praise of St Stanislaus (Stanislaw in Polish). Górecki had envisioned a cycle of large-scale works on Polish saints, but only these two pieces materialised. Although Bishop Adalbert (Wojciech in Polish) was born in Prague, he moved north to convert pagans in what is now Poland. He was killed there in 997, when he was 31, was canonised three years later and became Poland's first patron saint.

Górecki drafted his score for the millennial commemorations of Adalbert's martyrdom, but the project fell through (in the event, he did not write the fourth movement until 1998). But when another opportunity arose, he used much of the third movement 'Hymnus' for the final joyful section of Salve, sidus Polonorum (2000). Now that Mikolaj Górecki has prepared the full score of Sanctus Adalbertus, we will be able to hear it in its original context.

Sanctus Adalbertus has four movements, all of which relate to his other choral and vocal pieces (with or without instruments) in their contemplative directness. Typically, the orchestra is used either sparingly or tutti. The first two movements, 'Psalm' and 'Lauda', are solemn invocations. The concluding 'Gloria' is built around Poland's Christian battle-hymn, the medieval chant Bogurodzica, and it brings the oratorio from its initially reflective mood to a resounding, major-key celebration. 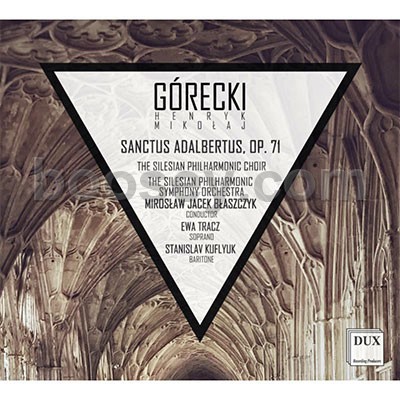