An early Howells gem is his Elegy dating from 1917. Modelled on the Vaughan Williams Fantasia on a Theme by Thomas Tallis it was composed as a personal tribute to a fellow student at the Royal College of Music killed in the First World War. It is a prescient early pointer towards Howells’s later memorial works and worthy to be programmed alongside English classics for string ensemble or string orchestra by Elgar, Vaughan Williams, Finzi and Britten. 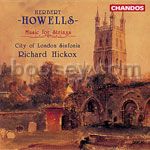