In 1951 Hugo Herrmann wrote the Seraphic Music – Ludus sopra antiphonae "In paradisum", a kind of credo by the devout Catholic, who recorded it in 1952 and 1954 for the South German Radio (SDR) Stuttgart and Bavarian Radio (BR) Munich, respectively. All three movements are based on the Gregorian chant "In paradisum". Additionally, in the second movement, Evocation, the dramatic climax of the triptych, the B–A–C–H motif appears in various transpositions, ultimately also in the original form. Far from all stylistic classifications, a music that reveals itself in the Präambulum seems to arise as out of a long existing, yet inaudible motion – an archaic polyphonic architecture of sublime expanse of space which once again is reminiscent of Busoni's acknowledgment of Die "Gotiker" von Chicago. In this triptych, Hugo Herrmann creates a world of sound that counters the breakneck pace of the rebuilding in West Germany after the apocalypse of 1945 with a radical pause, a meditation in harmonies that transcends the traditional categories of consistency and dissonance. Abrupt contrasts of dynamics and tonal registers mark the Evocation that constantly intensifies to new ecstatic, nearly menacing eruptions, which ultimately die out in the softest somber colors.
Pastorale in paradiso takes recourse to the models of motion of the _Präambulum, transforming it however into ritual-like perpetual ostinatos that are simultaneously joined in different speeds by the actual cantus firmus. In this way, a magical, quasi minimalistic continuum develops, allowing astonishing harmonic constellations to emerge. Like the previous two movements, the Pasatorale in paradiso also dies away in an explicitly indicated morendo. As the highest individual sounding attestation of an avowed Catholic, the Seraphic Music belongs to a tradition of religious-inspired piano works that ranges from Liszt to Messiaen, at the same time combining retrospective impressions of the old and new worlds into a fascinating synthesis.
Kolja Lessing (transl. Howard Weiner) 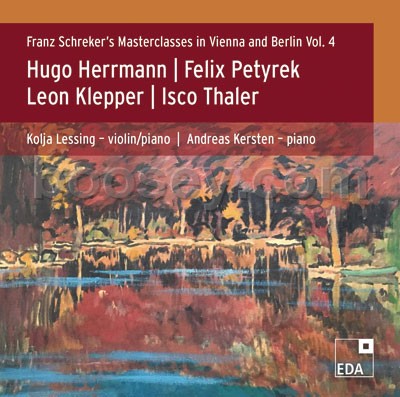